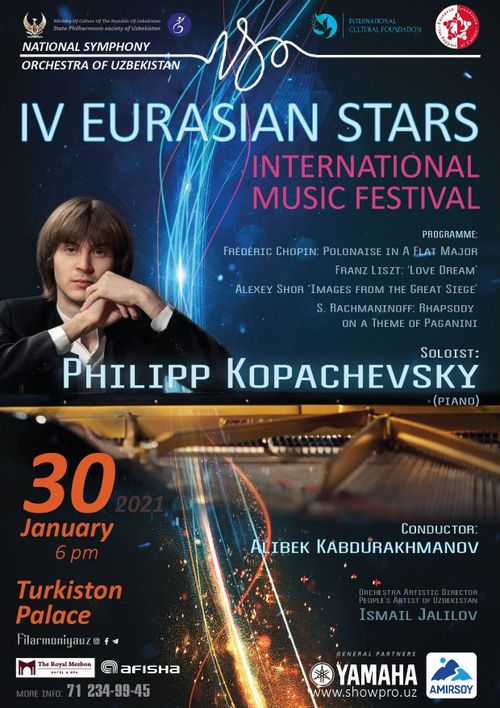 S. Rachmaninoff
Rhapsody on a Theme of Paganini

Experience as a conductor:

A soloist of the Moscow State Academic Philharmonic and a prize-winner at international competitions, the young pianist Philipp Kopachevsky had won tremendous audience admiration and acclaim by the age of twenty-five He regularly appears in recital in Great Britain, Germany, the USA, the Netherlands, France, Italy, Greece, Poland and Spain as well as throughout Russia. Kopachevsky has won particular popularity in Japan, where especially for NHK TV he recorded a disc of piano music by Chopin.

“The young pianist’s playing has a perceptibly personal message. The natural blend of mastery and spiritual maturity with raw emotion, the freedom with which the pianist expresses himself and his Romantic sincerity and nobleness win one over from the very first notes...” “From the first notes he plays, you sense the pianist’s powerful and lyrical individuality. His piano sings – this is a very rare quality nowadays, typical of a Romantic worldview; he retains clarity in his pianism and his phrasing is beautiful and pliant...” These are the kind of reviews Philipp Kopachevsky receives from music critics.

Philipp Kopachevsky was born in Moscow in 1990. He graduated from the Central School of Music of the Moscow State Tchaikovsky Conservatoire. He is currently a student at the Moscow Conservatoire (class of Professor Sergei Dorensky).

He performed at the world premiere of choreographer Benjamin Millepied’s ballet Without at the Mariinsky Theatre.  Philipp Kopachevsky is involved in the Moscow State Academic Philharmonic’s project Stars of the 21st Century.

The orchestra was founded in 1937. The first conductor of the orchestra was N. Gorchakov. In 1948, A. Kozlovsky took his place. In 1956-1963, the orchestra was directed by a graduate of the Moscow Conservatory Narimon Alimov, from 1963 to 1997 - People's Artist of Uzbekistan Zakhid Khaknazarov.

The main task of the orchestra is to perform symphonic works by Uzbek composers. At the same time, the collective's repertoire also includes works by composers from other countries.

It should be noted the special contribution of Alexey Kozlovsky, Mardon Nasimov, Nabi Khalilov, Kuvonch Usmonov and Zokhid Khaknazarov to the formation and creative activity of the orchestra.

In 1967 the orchestra toured in the republics of the former Soviet Union, in 1968 it won the competition for symphony orchestras of the Union republics.

In 1986, the National Symphony Orchestra was awarded the title of "Honored collective of the Republic of Uzbekistan".

In 1998, People's Artist of Uzbekistan Ismoil Jalilov was appointed artistic director of the orchestra, and composer Anvar Ergashev was appointed principal conductor.

In November 1998 the National Symphony Orchestra performed a concert dedicated to the 100th anniversary of George Gershwin, in which US soloists D. Washington (baritone) and D. Fergunes (piano) took part. The concerts organized by the US Embassy in Uzbekistan have become an important event in the cultural life of Uzbekistan.

The National Symphony Orchestra has 101 employees, 89 of them are musicians. Artistic director of the orchestra is People's Artist of Uzbekistan Ismoil Jalilov, conductor - Alibek Kabdurakhmanov (since 2018).