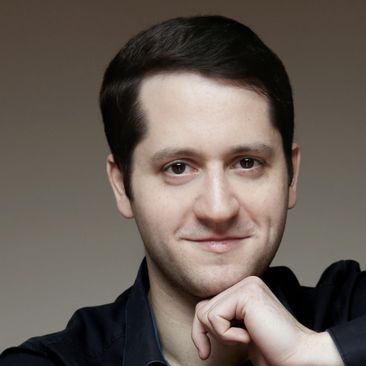 Winner of the prestigious Cleveland International Piano Competition 2016 and Paderewsky International Piano Competition Poland in 2007. Nikita Mndoyants, trained at the Tchaikovsky Conservatory in Moscow, has performed under the direction of renowned conductors such as Charles Dutoit, Leonard Slatkin, Dmitry Sitkovetsky, Vassily Sinaisky, Mario Venzago. He has performed with the Cleveland Orchestra, the “Evgeny Svetlanov'' State Academic Symphony Orchestra, the Saint Petersburg Philharmonic Orchestra, the Orchestra de Mulhouse and many more. In recital, he has traveled to the greatest stages in the world and was applauded in particular at Carnegie Hall in New York, at the Tchaikovsky Hall in Moscow, at the Salle Cortot and at the Auditorium du Louvre in Paris, at the Philharmonie de Luxembourg and at the Elbphilharmonie in Hamburg. Nikita Mndoyants is also a regular guest at the Ruhr Piano Festival (Germany), the Chopin Festival in Duszniki-Zdroj (Poland), the Freiburg International Piano Series (Switzerland) and since 2012, the International Music Festival of Wissembourg (France). After performing with the illustrious Borodin Quartet in 2004, he continued to cultivate his passion for chamber music alongside fabulous ensembles such as the Brentano, Ebène and Zemlinsky Quartets. Recognized composer, Nikita Mndoyants shares his own compositions with the public of his recitals. Nikita Mndoyants is well known on the airwaves of France-Musique as well as Polish Radio; he has resided in France since 2018.