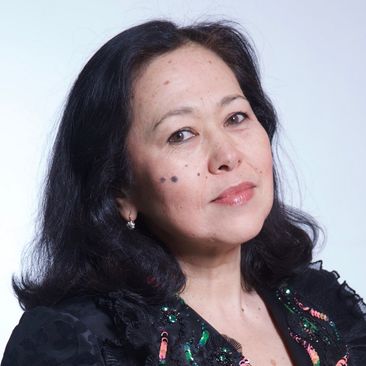 According to the contest conditions, the winner was entitled to ten solo concerts in various cities of Italy, and Gulzhamilya Kadyrbekova’s performances were a triumphant success everywhere. In their excited reviews musical critics unanimously recognized the emergence of a new bright artistic name, called her a “great pianist”, “pianist of international class”, “tiger of a fingerboard”, emphasized her extraordinary musicality coupled with the “dizzying technique”, noted her “perfect performance” of the works being part of a program of her performances, compared her play with the outstanding artists of the XX century: Ciccolini, Berman and Cziffra.

The time after the contest was marked for the pianist with continuous artistic perfection.

With her inherent persuasiveness of interpretations, she performs works by Scarlatti and Bach, Mozart and Schubert, Beethoven and Brahms, Chopin and  Schumann, Rakhmaninov and Prokofiyev, Shostakovich and Gubaidulina. Her extensive repertoire covers all musical periods and styles. Gulzhamilya Kadyrbekova is also an active promoter of the works of Kazakh composers: G. Zhubanova, N. Mendygaliyev, T. Kazhgaliyev.

Gulzhamilya Kadyrbekova was born in Alma-Ata. She received her initial musical education in the Republican Special Music School named after K.Baiseitova, from which she graduated in the class of Associate Professor Lyudmila Ivanovna Oshkukova. She graduated from the Moscow State Conservatory named after P.I. Tchaikovsky and post-graduate school under the direction of Honored Artist of the RSFSR, Professor Gleb Borisovich Axelrod, who had a great influence on the formation of the pianist’s personality.

The high musical culture, honed skills, generosity of her performing style, extraordinary artistic charm and spirituality of the performance – all these qualities brought wide recognition to the pianist.

As a soloist of the Kazakh State Philharmonia named after Dzhambul, Gulzhamilya Kadyrbekova lifted a huge collection of complex works of the world’s piano literature both in the performances with orchestra and in solo and chamber music concerts. Her recent concerts include such works as Ravel’s Concerto for the Left Hand d-moll, Beethoven’s Fantasy for Piano, Orchestra and Chorus C-dur, Concerto No. 5 and Triple Concerto, Chopin’s Concertos No. 1 and No. 2, Brahms’s Concerto No. 1, Tchaikovsky's Concertos No. 1 and No. 2, Rachmaninov's Rhapsody on a Theme of Paganini, Gershwin’s Concerto in D Major, Poulenc’s Concerto for two pianos. Gulzhamilya Kadyrbekova constantly gives concerts both in her native country and abroad with well-known orchestras and conductors such as the Russian Philharmonic Orchestra conducted by Dm. Kitayenko, Romanian Philharmonic Orchestra conducted by O. Balan, Georgian Philharmonic Orchestra, State Symphony Orchestra of the Republic of Kazakhstan, etc.

After her success at the contest, Gulzhamilya Kadyrbekova gave a series of concerts in Italy and participated in the XX International Music Festival in Stresa with M. Rostropovich, V. Ashkenazi and A.-S. Mutter, where she gave a solo concert, which the reviewers called “magic”. Kadyrbekova’s performance at the festival of young performers “Interforum” in Hungary left a “very good impression”, as it was noted in the press. Her concerts in the best halls of Moscow were a huge success (Hall named after Chaikovskiy, Conservatory Small Hall), St. Petersburg (Great Hall of Philharmonia named after Shostakovich), Rome and Turin (conservatory halls), Vienna, Paris (Debussy Hall in Pleyel, Cortot Hall in the Ecole Normale), Tunisia, Ankara (University Concert Hall), Istanbul (Ayia Irini Hall), the cities of the Baltic states and the Caucasus, etc.

In 1981, the pianist recorded a solo album with the Second Sonata b-moll of Rachmaninoff, “Scherzo and March” and “The Forgotten Waltz No. 1” of Liszt at the record company “Melody” in Moscow.

In 2015 Gulzhamilya Kadyrbekova recorded all Impromptus of Schubert at the record company “Hofa” in Germany.

Gulzhamilya Kadyrbekova is in the prime of her creative powers, at the stage, when a person combines gained experience, performing maturity and its usual idea of searching. This is reflected in her concert programs, which are always substantial, attracting with their wide range, as well as in the interpretation of the works performed – the ability to give them a live and direct feeling, to speak the language of music sincerely and with emotion. The harmonious relationship of the emotional and intellectual beginning is a characteristic feature of the pianist’s performing image. Her play attracts with its integrity and credibility of the interpretation coming from a deep comprehension of the author’s intention. A wide range of dynamic gradations also draws attention, in which the noble-sounding and very powerful forte stands out. One of the advantages of Gulzhamilya Kadyrbekova is her developed sense and skillful use of the timbre and coloristic capabilities of the instrument. Talent, intelligence, desire of grace communication with the public – this is a key to achieving new heights by the pianist.